Cecil was born at 55 Sparkenhoe Street in the parish of St Peter’s.  Vivian took on the leasehold of a villa at The Fosse, Syston in 1896, which had six bedrooms, a billiards room, dining room decorated in “finest Italian style”, garden with croquet lawn and rockeries, a tennis court and a mushroom house.  It was described in 1899 as being “decorated in a most artistic manner.”  By 1904 the family had moved to 96 New Walk where they remained until around 1909.  After this time they moved out of the city, living at Queniborough Hall where they would remain until after the war.  Vivian Mackay Woodhouse practiced law at Salusbury & Woodhouse solicitors, which from 1908-72 had its office at 3 Wycliffe Street in the parish of St Martin’s.

Cecil attended Stoneygate School and then The King’s School, Canterbury from 1904 until 1909 (where he was a member of the Officers Training Corp).  Afterwards he studied architecture, passing RIBA exams in 1912 whilst working as a trainee architect with Messrs Stockdale Harrison and Sons.  No doubt he was acquainted with Everard Harrison.

Cecil applied for a commission in the Leicestershire Regiment on 13th October 1914 but was turned down.  He then applied to the Sheffield City Battalion, York & Lancaster Regiment – this time successfully.  He was commissioned 2nd lieutenant in the 12th Battalion on 1st November 1914 and promoted to Lieutenant shortly afterwards in March 1915.  Cecil served in Egypt during late 1915 and then from 15th March 1916 in France. On 9th April 1916 he was wounded but returned to service a month later, only to be hurt again a few weeks later, this time more seriously with wounds to his scalp, leg and chest.  He was treated at Number 2 Southern General Hospital in Bristol and eventually returned to the front.

Cecil died in Flanders on 5th June 1918.  Three officers including Cecil, plus 68 men from other ranks had effected a raid on Lankhoff Farm, which was unsuccessful.  Cecil’s body was not recovered.  His father was sent a telegram ten days later, which read “Regret to inform you that Lieut. C. H. Woodhouse York and Lancaster Regt missing fifth June.  Further news if received.”  The death was reported by the Germans to the Red Cross in September 1918.  He is remembered at Tyne Cot Memorial.

After the war Helen Maria and Vivian moved to “Knighton Close”, Ratcliffe Road.  Between 1928 and 1941 they lived at 94 Regent Road.  Helen Maria died living at 94 Regent Road in 1939 and Vivian at 19 Lower Hastings Street in 1948 where he was living from at least 1946.  Vivian was still practising as a solicitor as late as 1939.  They were buried in Queniborough and their grave also remembered Cecil: 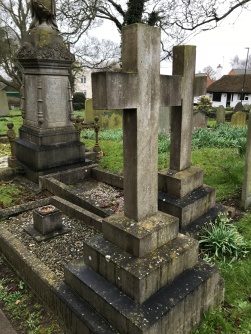 Cecil’s sister Vivienne and her husband Sir John Harold Corah lived on at Queniborough Hall.  In 1933 Sir John was High Sheriff of Leicestershire.