William Sculthorpe (1839-1927), a bank inspector. married his second wife Annie Marston Boulter (c1862-1926) in 1884 in Philadelphia, USA.  Annie was a native of Philadelphia.  Together they had just one child, William Vaughan Sculthorpe who was born at Westleigh House, 3 Ashleigh Road, Leicester on 9th May 1891.  He was baptised at the Church of the Martyrs on 20th September 1891.  Although William Vaughan had no siblings there were often maternal aunts living in the family home.  The family began their connection with St Martin’s sometime after William’s baptism and in 1899 Annie was in charge of a stall at St Martin’s “Yellow Bazaar.”

By 1911 William’s father had retired and William Vaughan Sculthorpe was a student at Lincoln College, Oxford University.  He graduated in July 1914 with third class honours.  Soon after he enlisted as a Lance Corporal and was later commissioned second lieutenant in the 1/22nd Battalion London Regiment “The Queens” on 2nd November 1915.  On 29th January 1916 William reached his battalion at the front, at Les Brebis, arriving straight from Training School.  He was posted to ‘C’ company.  The Battalion war diary does not mention William again, but he was killed in action on 8th June 1917 during the attack on Messines Ridge early in the Third Battle of Ypres, also known as the Battle of Passchendaele.

The battalion war diary records that the men had a bath and clean clothes on 1st June 1917.  On the 3rd preparations were made for battle, including storage of great coats and packs, issuing necessary stores and putting together fighting order.  On the 4th June the battalion proceeded to relieve the 19th London Regiment.  British artillery were “exceedingly active” throughout the night and into the morning of the 5th June.  At around 3pm the enemy responded with its own heavy firing.  The 6th June was a similar day and overnight the 1st/22nd Battalion cut holes in the barbed wire defences to enable its men to go “over the top” and attack the German line.  At 1pm on 7th June the battalion got into position to attack.  At 3am there was a terrific shake of the earth caused by the explosion of mines.  The whole battalion at once moved forward.  The attack was generally successful in meeting its first objectives.  Many Germans were taken prisoner.  Others who refused to come out and surrender were “dealt with”.  However the third and fourth ‘waves’ found their task more difficult due to the condition of the ground, which was now a mass of large shell holes with no landmarks remaining. On the 8th the enemy heavily shelled the British lines with shrapnel and 4.2 shells, both in the morning and after a brief pause again in the afternoon.  The night passed relatively quietly but William Vaughan Sculthorpe was already dead.  He was buried at Woods Cemetery, Belgium, which is just outside Ypres.

Mr and Mrs Sculthorpe, of 3 Ashleigh-road, have been informed that their only son, 2nd Lieut W Vaughan Sculthorpe, was killed in action in Flanders on June 7th.  The deceased took his BA at Oxford some time ago, and at the time of his death was 26 years of age.  His father was for some time manager of the Leicestershire Bank and formerly took part in local affairs, and great sympathy will be extended to the family in their sad bereavement.

William left no will but his father was granted administration in respect of his estate of £376 14s 4d.  William is remembered at St Martins and also on the war memorial to members of the parish and congregation of St Bartholomew’s, Sydenham.  It is unclear what William’s connection with St Bartholomew’s was, but the crypt was used as an air raid shelter during both world wars.

Annie died in 1926 and William in 1927, both still living at 3 Ashleigh Road.  They were buried at Welford Road Cemetery and their grave stone also commemorates William: 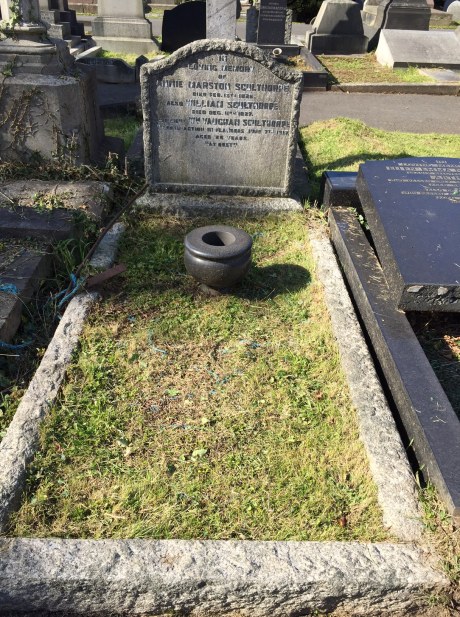