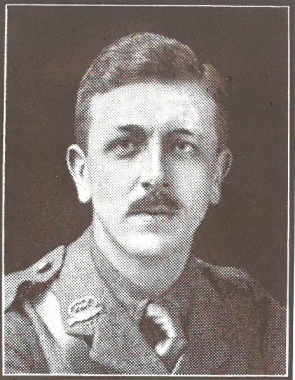 John Frederick Johnson was the only child of James Johnson (1849-1927) and Annie Elizabeth Flude (1856-1947) who married at St Matthew’s church in 1887.  He was born on 28th September 1889 and baptised at St Matthew’s shortly after on 6th November.  After their marriage James and Annie moved into 5 Upper King Street, where John was born and where they would remain for the next forty years.  James worked for himself as an accountant in shared premises at 24 Millstone Lane.

John attended Wyggeston School, was later a student at St John’s College, Oxford (1911) and became a cadet in the Oxford University Officers Training Corps.  He took Honours in Greats and a degree in Divinity.  He joined the 1/4th Battalion Leicestershire Regiment as a second lieutenant on 19th October 1914.  John departed Southampton on the 2nd and arrived at Le Havre on 3rd March 1915.  On arrival at No 6 Rest Camp, Le Havre, he was detailed to lead the Wagon Sanding Party.  On 12th March he worked with fellow St Martin’s man Second Lieutenant Frederick Maxwell Waite as “Sub of the Day” prior to the journey to billets at La Bizet.  They often worked together, until Frederick was killed in July.  John was promoted Lieutenant on 8th September 1915.

The 1/4th Battalion fought at the Battle of Loos, including the attack on the Hohenzollern Redoubt on 13th October 1915 described by the regiment as “one of the most brilliant exploits of the war.”  However, all the officers of the battalion were either wounded or killed.  John was seriously wounded.  The Wyggestonian magazine recorded that five Old Wyggestonians were wounded at Hohenzollern, including John, and eight had been killed.  John joined their number soon after, dying in hospital on 30th October 1915.  He was buried at Lillers communal cemetery, in France.  He left £85 6s 5d which was sent to his father on 12th March 1917.  John had left no will, so letters of administration were obtained to enable his father James to inherit his personal estate of £409 6s 8d.

James continued working as an accountant at 24 Millstone Lane throughout the war.  Although he did not live in the parish of St Martin’s, he had been baptised in the church in 1849 and worked in the parish for many years, and was probably well known.  So when the call went out for names of men of the parish who had fallen, James and Annie obviously felt that St Martin’s Church was where they would like their son remembered, and this was agreed by the deciding committee.  James worked on in Millstone Lane until around 1923 when he probably retired in ill health.  During the late 1920s he worked on a catalogue of Leicester Abbey.  He died in Bournemouth in 1927, still living at 5 Upper King Street.  Annie lived on for another twenty years, dying in March 1947 in Derbyshire (where she had been born).  They are both buried at Welford Rd Cemetery.